Book of the Week: American Girls

Anna, 15, ran away to her older sister Delia’s in Los Angeles using her stepmother’s credit card to buy a plane ticket, a cost Anna’s now expected to repay. Delia’s boyfriend, Dex, writes for a Disneyesque series called Chips Ahoy! Anna spends days with Dex while Delia goes to auditions and appears in her former boyfriend Roger’s independent movie. Meanwhile, Roger has hired Anna to research Charles Manson for his film. The inanity of Chips Ahoy! is stark contrast to the Manson murders, not to mention the uneasy life of beautiful Delia, whom Anna fears is being stalked. Anna can’t understand why the young women following Manson were willing to commit such atrocities. With one exception, most of them grew up in imperfect but not unloving families. How and why did they fall under Manson’s thrall? Anna’s own mother is incredibly self-centered; her sister supportive but worrisome and frustrating; her stepmother annoying yet stable. In a startling, original, complex debut novel, Anna’s voice is sharp, witty, and also honest. She is unrepentant about cyberbullying a girl back home, for example (it wasn’t even her idea, she notes), although she gradually comes to regret it. The brilliantly realized Los Angeles setting also works as a means to magnify the ways women and girls everywhere are too often objectified, invisible, exploited, and sometimes abused. It’s among the many things Anna ponders with increasing clarity that is poignant, and at times profound. “Los Angeles … is not really so different from the rest of America.” ©2016 Cooperative Children’s Book Center
Posted by Megan Schliesman at 7:17 AM No comments:

Email ThisBlogThis!Share to TwitterShare to FacebookShare to Pinterest
Labels: 2016 Books, Book of the Week, YA Novels 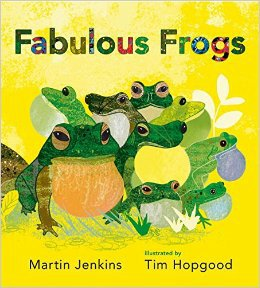 “This frog is huge (for a frog).” Indeed, the goliath frog found in western African that is pictured on the opening pages of this dynamic informational picture book barely fits on the two-page spread. A turn of the page reveals a scattering of diminutive, fingernail-sized frogs found in Papua, New Guinea. Author Martin Jenkins and Illustrator Tim Hopgood share their appreciation and enthusiasm for frogs of many types (and sizes and colors and other varied traits) in this gathering of fascinating frog facts. The clean, simple page design, conversational narrative and arresting mixed media illustrations work together to create an inviting book of information for younger children. The primary narrative is accompanied by additional facts in a smaller font on most pages, telling more about the specific creatures. An index and suggested web sites for more exploration are included.

Posted by Merri Lindgren at 10:33 AM No comments:

CCBC Book of the Week: The Quickest Kid in Clarksville

The Quickest Kid in Clarksville

Alta prides herself on being the fastest runner in Clarksville, Tennessee, hometown of Olympic star Wilma Rudolph. But Charmaine, of the new-shoes-just-like-Wilma’s, is fast, too. She may be even faster than Alta, although it’s hard to say: Alta is sure Charmaine tripped her when she won the race between them. Alta ended up with a hole in her sneaker. “Oh, baby girl,” says Mama. “Those shoes have to last.” On the day of a parade for Wilma Rudolph, Alta and her friends Dee-Dee and Little Mo make a huge banner, but getting the banner all the way to the parade isn’t easy, and time is running out. Then Charmaine shows up and suggests they take turns carrying it--a relay, just like Wilma ran for one of her medals. “Three people ran it with her, you know,” Charmaine says. “I hate to admit it, but she’s right.” A spirited story set in 1960 ends with an author’s note featuring a photograph of Wilma Rudolph at the real parade held in her honor in Clarksville. The energetic illustrations are full of movement and feeling. ©2016 Cooperative Children’s Book Center
Posted by Megan Schliesman at 6:05 AM No comments:

Book of the Week: My New Mom and Me


“When I first came to live with my new mom, I was nervous.” The speaker in this picture book is a puppy, and the new mom a striped cat. Despite being animals, their strong feelings and realistic interactions are a spot-on portrayal of the emotional landscape of a young child entering a new family. The young narrator’s observations range from the novel (“I’d never had my own room before”), to the reassuring (“she takes care of me”), to the universal (“She does all the things that moms do--even the things that make me mad!”). When the puppy worries about looking different from the mom and paints on stripes to “fix it,” Mom gently washes them off and says she likes that the two of them are different. Acknowledging dark moments along with brighter times and recognizing that both child and parent are navigating new ground sets the stage for honest conversations in all kinds of families in this comforting, reassuring picture book. (MVL)  ©2016 Cooperative Children’s Book Center
Posted by Megan Schliesman at 6:00 AM No comments:


Chloe Cho’s immigrant parents never talk about Korea so she’s explored her heritage on her own. A class assignment leads to crisis when her parents’ reticence makes it impossible for Chloe to share a family story as required. Finally, her parents reveal that they aren’t really Korean; they’re aliens from another planet. They intentionally chose an all-white U.S. town where its assumed they don’t know things because they are immigrants. In turn, the residents of the town are so ignorant about Koreans that no one has ever assumed Chloe’s parents are anything but what they claimed to be. Chloe’s best friend Shelley, who has learned about Korean culture with Chloe, is the only person who has always understood Chloe’s eye-rolling annoyance and occasional anger at the many uninformed things people say to her. Classmates assume, for example, that Chloe is obsessed with good grades and plays the violin because she is Asian, not because she is Chloe. Learning that she isn’t who, or even what, she always thought makes Chloe question everything, including Shelley’s interest in her culture, until she discovers both how little has changed and how much the things that matter—true friendship and family love—have remained steadfast. Mike Jung’s use of otherworldly “aliens” as a metaphor for how white people think about people of other races makes for a smart, funny, layered novel that is both blithe and deeply insightful. ©2016 Cooperative Children’s Book Center
Posted by Megan Schliesman at 6:00 AM No comments: