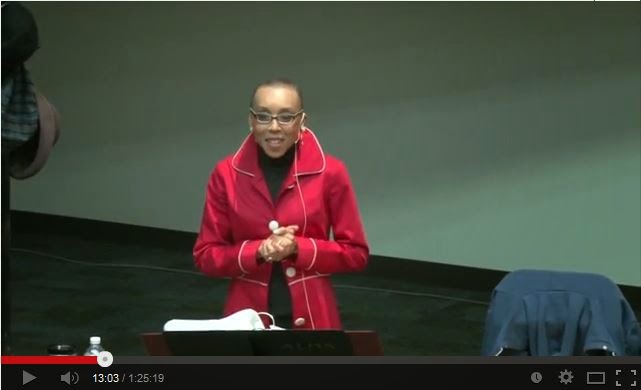 Thanks to the University of Minnesota, Andrea Davis Pinkney's amazing 2014 May Hill Arbuthnot Lecture is now available on YouTube.
Posted by K T Horning at 11:47 AM No comments:

Hope Is a Ferris Wheel


Ten-year-old Star is starting a new school in northern California after moving with her mom and teenage sister, Winter, from Oregon. Star starts a Trailer Park Club hoping to make friends, but only a girl named Genny willingly joins. Then Star discovers the poetry of Emily Dickinson and the club gets a new name and focus, and two more members: Eddie, intensely interested in poetry, and his best friend Langston, who prefers drawing bras. Then Winter, at odds with their mom over school, tells Star she wants to visit their long-estranged father back in Oregon. Star has a vague memory of him and imagines all the things she might tell him about herself if she had the chance. After she and Winter make the trip, Star returns home worried about her sister, who has revealed she is pregnant, and furious at their mom, who never told her that she and Winter have different fathers, or anything about her own dad. Robin Herrera’s impressive debut novel has a smart, thoughtful, stubborn girl delving deep into her heart, and trying to understand the hearts and minds of those around her. Star is socially naïve yet deeply perceptive, qualities revealed with both sensitivity and humor. The sentences Star writes for her spelling word assignments, and her ongoing refusal to turn them in, are among the wonderful ways Herrera reveals dimensions of Star’s character and life. Star’s family is living on the economic edge, a reality that is seamlessly woven into a story about the ways we hurt, and the ways we hope. (MS) ©2014 Cooperative Children’s Book Center
Posted by K T Horning at 6:21 AM No comments:

Beyond Magenta: Transgender Teens Speak Out


“My subjects’ willingness to brave bullying and condemnation in order to reveal their individual selves makes it impossible to be nothing less than awestruck.” (Susan Kuklin, from the Introduction) Six transgender teens share their journeys to coming out into the open as their true selves in this gathering of voices in which each offers insight into being transgender as part of their broader identities, and in the context of their families, their communities, and a society not always ready to accept, let alone embrace, the truth about this aspect of who they are. The profile of Christina includes a discussion with her mother, who initially struggled but now celebrates her daughter’s strength and courage. Cameron is full of idealism and looks for ways to challenge perceptions of gender every day. Mariah says, “Transition? Everyone goes through one kind of transition or another….Except mine is maybe a little more extreme.” Nat has battled severe depression but is hopeful about his future. Jessy notes, “I’m embracing my in-between-ness. I’m embracing this whole mix that I have inside myself … So forget the category. Just talk to me. Get to know me.” In the profile of Luke, who lives in Madison, Wisconsin, Kuklin shows the important role community and adult mentorship can play as he talks about his work in a local LGBTQ theater company and its impact on his self-understanding: “Portraying a trans person came really, really easily….because I was acting the role of a trans man, I could explore being trans deeper than I could by just thinking about it.” Most of the profiles include wonderful photographs taken by Kuklin of the teens. A glossary, extensive resources, and an interview with the clinical director of a program providing outreach to gay, lesbian, bisexual and transgender teens rounds out this groundbreaking, inspired, essential work. (MS) ©2014 Cooperative Children’s Book Center
Posted by K T Horning at 6:31 AM No comments:

We don't normally have groups of first graders at the CCBC (most of our student groups are in college) but this week we made an exception for thirty children from Sugar Creek Elementary School in Verona, Wisconsin. They were on campus to participate in a film their teacher has been making called "If You Want to Be a Reader." He wanted to get footage of his students reading on the University of Wisconsin campus.

They came to the CCBC in two groups of fifteen, ready to read. In preparation, I had set out a few dozen picture books and easy readers. Most of them were selected from CCBC Choices 2014 and from past winners of the Charlotte Zolotow Award.

We do this all the time when we host groups of college students, teachers, and librarians. We surround our visitors with good books, face out, that reflect the diversity we see in the world. It's always interesting to see what books people gravitate toward.

I asked the Sugar Creek first graders to take a look around. Did they see any books they recognized?  "Each Kindness," one girl said. "Our teacher read it to us." Any others? They took a good look around, taking their job seriously. Lots of head shaking.  "No." "I don't think so."

"Do you see any books you want to read?"  Lots of nodding. A few excited children jumped up to point at the books they wanted me to read. Here's what they chose by consensus:

What Can You Do with a Paleta? by Carmen Tafolla.

The Dark by Lemony Snicket (both groups chose it)

Niño Wrestles the World by Yuyi Morales (both groups chose it)

Take Me Out to the Yakyu by Aaron Meshon

Each Kindness by Jacqueline Woodson ("We already know we like it," explained one boy.)

On this day that saw the launch of the #WeNeedDiverseBooks campaign, I saw first hand, in not one group but two, that given choices, young children themselves will choose diversity. And they all find underwear really, really funny, no matter who is wearing it.
Posted by K T Horning at 3:58 PM No comments:

Several years ago, a Korean American colleague of ours was in the CCBC reading the latest picture book by Yumi Heo. She was laughing aloud with nearly every page turn.  "Oh, these pictures!" she said. "They're so Korean and so funny!" We loved the book ourselves but hadn't found the illustrations to be particularly funny. Or, for that matter, particularly Korean. 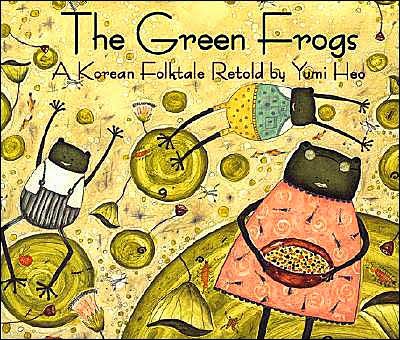 And that's the point. We're not Korean so we couldn't see it.

So that's why I find it a bit unsettling that School Library Journal's diversity issue includes Culturally Diverse Books Selected by SLJ’s Review Editors as a list that's divided into two sections: Culturally Specific and Culturally Generic/Neutral. The latter is defined by them as  "... books ... in which the main character(s) 'just happen' to be a member of a non-white, non-mainstream cultural group. These stories, rather than informing readers about individual cultures, emphasize cultural common ground."

My first response was to ask: whose cultural common ground are we standing on?  Would a Japanese-American reader of Cynthia Kadohata's novel The Thing about Luck likely see something in the book that a non-Japanese-American reader would miss, just as I missed the Korean humor in Yumi Heo's illustrations?  Did Meg Medina's Yaqui Delgado Wants to Kick Your Ass have a cultural resonance for the members of the Pura Belpré Award Committee that led them to choose it as a book that "...best portrays, affirms, and celebrates the Latino cultural experience" rather than as a culturally generic/neutral novel selected by SLJ's review team?

My second response is to wonder why the books in the Culturally  Generic/Neutral category need to be separated from the Culturally Specific category, which is defined as books featuring  "...authentic and positive portrayals of people from diverse ethnic, racial, and religious backgrounds, as well as characters who identify as LGBTQ or are from underrepresented socioeconomic groups." Really? Then why is Matt De La Peña's The Living in the Generic/Neutral category? It's been a while since I read it, but what I remember most about it is that the main character was a working class Chicano kid, and his class, gender, and cultural identity played an important part in how he interacted with other people and how they interacted with him. Oh, and there was that tsunami.

In fact, it's interesting that ten of the thirteen books in the Generic/Neutral category were actually written by people who belong to the culture about which they are writing, while only seven of the thirteen Culturally Specific books were. The only book on the list with Native American characters was written by a white author.  It was classed as "Culturally Specific." It makes me wonder how If I Ever Get out of Here by Eric Gansworth would have been classified if it had been included on the list. Would it have landed on the Generic side because the main character likes The Beatles?

Even more interesting is to look at how the stars fall on this list. Of the twenty-six books included, eleven are starred -- eight in the Culturally Specific category. Of these eight, five are written by white authors, outsiders to the cultures about which they are writing.

Perhaps this suggests that Culturally Specific is really defined here as Otherness, and that this sense of Otherness is best depicted by those who are outsiders to the culture. But when Kwame Alexander or Varian Johnson write about African American boys, their characters are viewed as Culturally Generic.  That may be because they are writing their characters from the inside, more Us than Other.  They have invited readers to stand on their own bit of cultural common ground for a while. For African-American readers, that may be a familiar, comfortable place, and for those readers who are not African-American themselves, they will find that it's a common ground after all. And when it comes to cultural diversity, that will likely be more illuminating than finding out what exotic thing the character ate for breakfast.