Book of the Week: Raymie Nightingale 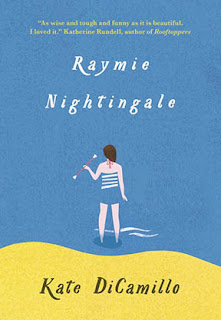 Raymie, 10, is determined to become Little Miss Florida Central Tire so her father, an insurance agent who recently ran off with a dental hygienist, will read about her in the paper and realize his mistake. At baton twirling lessons she meets Louisiana Elefante and Beverly Tapinski. This story set in a small Florida town in the 1970s moves quickly while capturing the hot, timeless feel of summer as the three girls form an unlikely, not always easy friendship. Bold, brash, seemingly fearless Beverly; naive, sweet Louisiana; and uncertain Raymie first bond trying to reclaim a library book about Florence Nightingale from the nursing home where Raymie left it in a panic after the resident to whom she was going to read started screaming. Later, the three try to liberate Louisiana’s beloved cat, Archie, from the grim shelter where her Grandma took him because they can’t afford cat food. (They can’t afford human food, either.) In between, the girls discover things about one another and about themselves. It turns out they all are bold and fearless and uncertain and sweet in a tender and funny novel that exposes the hope in their connection. For Raymie, who wants to be special enough to bring her father home, friendship changes nothing, and yet it changes everything.  © Cooperative Children's Book Center
Posted by Merri Lindgren at 8:40 AM No comments:

Book of the Week: Excellent Ed


“All of the Ellis children were allowed to eat at the table and ride in the van and sit on the couch and use the indoor bathroom. Except Ed.” Ed is prohibited from these activities because he’s a dog, not that Ed himself makes any distinction between himself and his human family. But because each of the other Ellis children excels at something—Elaine at soccer, Emily and Elmer at math, Edith at ballet, and Ernie at baking cupcakes—Ed goes in search of what he’s best at. The search leads to answers that are satisfying for Ed and for readers and listeners, too. It’s hard to say which is more appealing in this sparkling picture book, Ed or the entire lively Ellis family, of which Ed is clearly a much-loved member. The wonderful narrative makes judicious use of repetition while the vivacious illustrations are full of humor and warmth. The Ellis family is Black, with children ranging from early-elementary-age to their teens, something typical for many families but not for many picture books. ©2016 Cooperative Children’s Book Center
Posted by Megan Schliesman at 6:00 AM No comments:

Book of the Week: It Ain't So Awful, Falafel

It Ain’t So Awful, Falafel


Zomorod and her parents are in the United States for her dad’s job as an engineer working at a California oil company. Zomorod, who has chosen the Brady Bunch-inspired name “Cindy” at school, narrates an often funny and always insightful account of her life as an Iranian immigrant in the late 1970s (an era that is vividly and often delightfully realized here). Her father is openhearted and upbeat but her mother finds it difficult acclimating to their life in America. Struggling with English, she rarely leaves the house. Zomorod, like her dad, is happy. Despite often being mistaken as Latina by strangers (no one has heard of Iran), she also has good friends. Then the Shah of Iran is overthrown and Ayatollah Khomeni comes into power. The hostage crisis horrifies Zomorod’s family. So, to, do the oppressive religious restrictions under Khomeni’s rule. Meanwhile, everyone in America suddenly wants to know or has something to say about Iran. Zomorod’s mother finds purpose in helping other Iranians in their community feel less alone, but her dad loses his job and when he can’t find another he begins to lose hope as the family faces returning to their radically changed homeland. Dumas’s “semi-autobiographical” novel doesn’t shy away from the racism Zomorod and her family experiences. Yet her story is buoyed by this honesty, as well as the warmth of family, and the essential kindness of friendship. ©2016 Cooperative Children’s Book Center
Posted by Megan Schliesman at 6:00 AM No comments:

Book of the Week: Snail and Worm


Three short stories in chapter format describe the initial meeting of Snail and Worm and two episodes in their friendship in a droll offering with a delightfully deadpan quality in the humorous interplay between the straightforward dialogue and the offbeat illustrations. In the opening chapter, “Meet My Friend,” Snail and Worm meet while playing with their respective friends Bob the rock and Ann the stick. In “Snail’s Adventure,” Worm provides support and encouragement as Snail scales a tall flower, although neither he nor Snail notes the flower has bent low to the ground under Snail’s weight. (“Wow! They look like ants down there!” exclaims Snail from no more than an inch off the ground as several large ants march by.) “Meet My Pet” has Worm looking for his lost pet, whom he describes as brown and furry with sharp teeth. Terrified Snail is convinced it’s a spider, even after Worm’s lost pet, Sam, shows up and is clearly a dog. Meanwhile Rex, Snail’s dog, is clearly a spider. Playful contradictions give readers and listeners a lot to notice and to laugh about in a book perfect for beginning readers or as a read-aloud. The deceptively simple and expressive art shows great thought and sophistication in its design and execution. ©2016 Cooperative Children’s Book Center
Posted by Megan Schliesman at 6:00 AM No comments: