Book of the Week: Hurricane Child

Every morning Caroline Murphy hops on a speedboat and makes the short trip from her home on Water Island to her Catholic school on St. Thomas of the U.S. Virgin Islands. Caroline’s thick hair and skin “darker than even the paintings of African queens hanging in tourist shops” make her an easy target for bullies and contemptuous light-skinned teachers. Home isn’t much better: Her mother left Caroline and her father about a year ago, but the tenacious twelve-year-old is determined to find out what happened to her. When a new girl, Kalinda, transfers to Caroline’s school from Barbados, Caroline is immediately drawn to her and determined to make Kalinda her first friend—and possibly more. She suspects that Kalinda, like Caroline herself, can see spirits, and she enlists Kalinda’s help in communicating with them in the hopes that they will lead her to her mother. This emotionally complex novel thoughtfully explores the anguish that occurs when a mother’s survival comes at the cost of her daughter’s happiness. A vivid Caribbean setting and a tentatively hopeful ending will bring readers some relief on behalf of this determined and aching young girl. (MCT) ©2018 Cooperative Children’s Book Center
Posted by Megan Schliesman at 6:00 AM No comments:

Book of the Week: The Parker Inheritance

At her late grandmother’s house in Lambert, South Carolina, for the summer, African American Candice discovers an old letter referencing a hidden treasure in town. Her grandmother tried to find it to benefit the community years before. Instead, she left town in disgrace after losing her job as city administrator. Candice, who loves puzzles, teams with neighbor Brandon, who has research skills (and internet access at home), in hopes of finding the money and redeeming her grandmother’s name. Candice and Brandon’s emerging friendship slowly solidifies as details about their lives unfold (Candice’s parents are separated; Brandon is dealing with a bully and a disapproving grandfather) along with the mystery. Clues in the letter from the mysterious benefactor reference Lambert’s mid-twentieth century history, when Siobhan, the talented, forthright daughter of the tennis coach at the Black high school, was in love with Reggie, the best player on the team, despite her father’s disapproval. Chapters set in the past expand on the story Candice and Brandon are uncovering: When a secret 1957 match between the white and Black boys’ tennis teams triggers violent racist attacks after the Black high school team wins, Siobhan’s family and Reggie must flee town for their own safety. The teens’ resulting separation is at the heart of the mystery in this entertaining homage to The Westing Game that deftly yet meaningfully incorporates social justice issues from the past and the present (e.g., ongoing racism, homophobia).  ©2018 Cooperative Children’s Book Center
Posted by Megan Schliesman at 6:00 AM No comments:

Book of the Week: I Got a Chicken for My Birthday

I Got a Chicken for My Birthday


A girl who wants tickets to an amusement park for her birthday gets a chicken from her Abuela Lola instead. A chicken that isn’t interested in eating and doesn’t have time to lay eggs. It does, however, have a list. At the top of the list: 100 steel girders. At the bottom: a partridge in a pear tree. In between is everything from a winch, cement, a horse, and firewood to a bird, a cat (to catch the bird), a dog (to catch the cat) and poms poms. The chicken also has a plan. It involves complicated construction, which the chicken oversees as it puts the various animals to work. When the chicken arranges for Abuela Lola to visit it puts her to work too. “I got a chicken for my birthday,” says the young narrator with each turn of the page before describing the latest developments in a spare, droll accounting paired with colorful India ink illustrations that spare no details in documenting the absurdity (the chicken in a hardhat is priceless). The end result? A fully functioning amusement park. “I got a chicken for my birthday. And the chicken is a genius … Next year, I’m asking Abuela Lola for a trip to the moon.” ©2018 Cooperative Children’s Book Center
Posted by Megan Schliesman at 6:00 AM No comments:

Book of the Week: Snow Lane

Ten-year-old Annie Bianchi is the youngest of 9 kids in a Catholic family in mid-1980s Massachusetts. Exceptionally bright and creative, Annie’s in a class for gifted students despite struggling with dyslexia. Although Annie doesn’t always follow the nuances of social interactions, she looks for the good in people and has a wonderful friend at school in her lab partner, Jordan. At home, she doesn’t think of her family as poor, or even unusual, although Annie knows her teenage sister Fay’s physical abuse and cruelty, usually directed at her sister Nora, is wrong, just as she knows her mother is often overwhelmed. A narrative grounded in Annie’s perspective, told in her engaging, ingenuous voice, offers a masterful slow reveal of the larger truths hinted at in small details and occasional dramatic moments that are part of Annie’s daily life. It’s not that Annie’s an unreliable narrator; it’s that she only begins to fully comprehend that things at home are not typical when she gets a glimpse of her family through the perspective of outsiders after Nora runs away. Everything and everyone is more complicated, and more poignant, than at first revealed in this moving, captivating work about family, and resilience, and survival, and the love, in spite of everything, that is never in doubt. ©2018 Cooperative Children’s Book Center
Posted by Megan Schliesman at 6:00 AM No comments:

Email ThisBlogThis!Share to TwitterShare to FacebookShare to Pinterest
Labels: 2018 Books 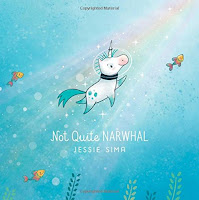 Book of the Week: Martin Rising

Martin Rising: Requiem for a King

In early April 1968, Dr. Martin Luther King, Jr., returned to Memphis to stand again with striking sanitation workers. Fevered and tired, he wanted to skip the April 3 evening rally at Mason Temple, but went and roused the crowd with his oratory and his faith in the path of nonviolence and the promise of the future he knew he may not live to see. Late afternoon April 4, he participated in a gleeful pillow fight in his room at the Lorraine Motel before dressing for dinner. These and other moments illuminated in poems detailing King’s life, and especially his final days, his death, and the grief that followed, are full of poignancy, power, and tension. Divided into three sections—Daylight, Darkness, Dawn—the poems’ language and cadence don’t just invite but almost insist on being spoken aloud. Impeccably researched and documented, the poems, paired with expressive mixed-media illustrations, conclude with a brief photo essay about the Memphis strike and King’s assassination, along with a timeline, sources, and an essential author’s note. “Can a dream ever die? / A burst of sun replies: / His life well lived for peace and good, / Martin’s spirit—still alive! / And with love, / we all shall rise.” The pain of King’s loss feels immediate and shocking, the hope of his legacy lasting. ©2018 Cooperative Children’s Book Center
Posted by Megan Schliesman at 6:00 AM No comments: