Book of the Week: The Inquisitor's Tale

The Inquisitor’s Tale Or, Three Magical Children and Their Holy Dog


Three children on the run become determined to save Jewish texts from the flames of the Inquisition in this riveting, richly detailed story set in thirteenth-century France. Jeanne is a peasant who has visions and has fled her village pursued by Church representatives. William, son of a nobleman and a north African Muslim woman, is a monk in training. Extraordinarily strong, he’s been tasked with carrying a satchel of books to the monastery of St. Denis as punishment for disobedience. Jacob is Jewish and has unusual gifts as a healer, but he is helpless when Christian boys on a rampage burn his village. Their separate journeys converge at an Inn where the boys help Jeanne escape the men who captured her. The trio continues to Paris, where Jacob hopes to find his parents alive. Instead, they learn of King Louis’ plan to burn 20,000 Jewish texts. Realizing William was given the books he is carrying to save them from the flames, it becomes a race against Church and King to get them safely to St. Denis. Each guest at the Inn where the children first met tell pieces of this story, a la Canterbury Tales, while the novel’s mysterious narrator, one of the eager listeners, brings the breathless account to a close. At times sobering as it reveals anti-Semitism and oppression during the Inquisition, this is ultimately a story of light and faith and hope and miracles, and friendship holds them all. Black-and-white illuminations illustrate the trio’s adventures with wit and tenderness. ©2016 Cooperative Children’s Book Center
Posted by Megan Schliesman at 6:00 AM No comments:

Book of the Week: The Sound of Silence 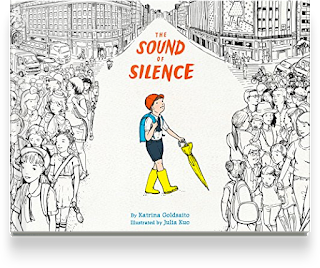 The Sound of Silence


On the busy streets of Tokyo, Yoshio asks a koto player her favorite sound. She replies that the most beautiful sound to her is ma, the sound of silence. Yoshio tries to hear the sound of silence, but can’t find it. Noise seems to be everywhere: kids at school, traffic on the street, his family’s chopsticks and chewing during dinner. It’s not until Yoshi is engrossed in reading a book in an empty classroom that he realizes he’s hearing a moment of ma. “It had been there between the thumps of his boots when he ran; when the wind stopped for just a moment in the bamboo grove; at the end of his family’s meal, when everyone was happy and full; after the water finished draining from his bath; before the koto’s player music began—and hovering in the air, right after it ended. It was between and underneath every sound.” A picture book set in Tokyo is illustrated with detailed pen and digitally colored scenes that are both expansive and intimate, much like the story is full of both activity and quiet. An Afterword gives additional information about the Japanese concept of ma. ©2016 Cooperative Children’s Book Center
Posted by Megan Schliesman at 5:48 AM No comments:

Book of the Week: Lucy and Linh


Fifteen-year-old Lucy, whose immigrant Chinese family lives in a poor neighborhood of Melbourne, is recipient of the first Equal Access scholarship offered by Laurinda, an upscale, private girls school. The economic and racial disparity between Lucy and her Laurinda classmates, most of who are white and wealthy, is glaring. For them, Lucy realizes, “money is just numerical and not frustratingly finite and concrete,” while the ways her race and culture are exoticized (e.g., a parent compliments Lucy’s “nimble” Asian fingers) or demeaned are countless. She resents it but also can’t help judging her own family and community harshly by comparison. When Lucy is invited into the circle surrounding “The Cabinet,” the ruling trio of girls at the school whose cruelty is sometimes astonishing, she knows there must be a reason. She discovers it’s to make sure she upholds the exact image of the Equal Access scholarship the school has in mind. Her anger at the revelation helps her heal the split she felt moving between two worlds: She’ll accept what Laurinda has to offer, but on her own terms. There’s a surprise reveal near this novel’s end but it doesn’t overpower the beautiful, sharp, perceptive writing throughout a novel full of observations that are sometimes funny, always scathing. Finely developed characters, including Lucy’s parents, two individuals with different natures but the same work ethnic and love for their family, and relationships, and burgeoning new and genuine friendships are another part of what makes this a satisfying work. ©2016 Cooperative Children’s Book Center
Posted by Megan Schliesman at 6:00 AM 1 comment:

Email ThisBlogThis!Share to TwitterShare to FacebookShare to Pinterest
Labels: 2016 Books, Book of the Week, Multicultural Literature, YA Novels

Book of the Week: The Airport Book

Endpapers showing a block of city apartments in the rain with a small boy and even smaller girl in two windows begin this account of their family’s airplane trip. The little girl packs her beloved stuffed animal monkey herself, resulting in a not-quite-securely-fastened suitcase. The family arrives at the airport, checks in, goes through security, and gets settled on the plane. The flight includes safety instructions, snacking, and cloud-watching. After landing they must wait for their luggage before going outside and into the arms of the children’s grandparents. Engagingly detailed page spreads offer intriguing and whimsical elements, from the family’s interactions, to fellow travelers, some of who can be followed or found again at journey’s end, to airport signs and scenes. Meanwhile, monkey’s parallel journey in the suitcase includes a surprising and sweet encounter with a live dog in the cargo hold. (Horizontally split pages show the progress of the luggage—and monkey—at the bottom.) Speech bubble dialogue adds additional humor to an inviting and informative primary narrative (“Inside the airport you stand in lines. You stand in lines to get your ticket. You stand in lines to check your bags. There are lines for the restrooms. There are lines to go through security.”) Closing endpapers show the mixed-race (Black/white) family on a sunny beach in a book that will delight young children, travelers or not. ©2016 Cooperative Children’s Book Center
Posted by Megan Schliesman at 6:00 AM No comments:

Book of the Week:
One Half from the East

One Half from the East

After Obayda’s family moves from Kabul to the village where her father grew up, the 10-year-old's aunt suggests she become a bacha posh—a girl who passes as a boy—to give her family the advantage of a son. Obayda's parents reluctantly agree. Obayda, now Obayd, likes being a girl, and doesn’t know how to move through the world with a boy’s swagger and certainty. Befriended by Rashid, an older bacha posh, Obayd soon is relishing the freedoms and privilege her older sisters do not enjoy, even in their progressive family. Obayd does things as a boy she never would have considered before, discovering a different kind of action and agency as she tries to help her father recover from injuries he suffered in a Kabul explosion. But there is nothing she can do to help Rashid(a) when her friend’s time as a bacha posh abruptly ends when she’s married off to the village war lord. A fascinating, swiftly paced, story firmly grounded in Obayd(a)’s perspective and experience makes clear gender has nothing to do with her physical or intellectual ability, only with how those abilities are perceived in a society where males are privileged. The book is not about gender identity (although Rashid references women she knows of who remained bacha posh or continued to pose as men their entire lives) but about how power is proscribed based on gender. These are big ideas, yet Obayda’s voice feels childlike and true. An author’s note provides additional information about bacha posh and context for the story. ©2016 Cooperative Children’s Book Center

Posted by Megan Schliesman at 5:59 AM No comments: