Book of the Week: The Last Last-Day-of-Summer

Cousins Otto and Sheed Alston are in a race against time--against stopped time that is. When a being called Mr. Flux freezes time in their town, the duo, with help from a mysterious man called TimeStar, who seems to know a lot about them, sets out to save the day. While beasts called Time Sucks threaten to destroy everything in their path, Clock Watchers, personifications of various times of day (e.g., Bedtime, Quitting Time, Golden Hour, A.M. and P.M.), are gradually aligning themselves on the side of good (the boys) or evil (Mr. Flux). Otto is methodical; Sheed full of heart; they are sometimes at odds with each other, and, from Otto’s perspective, definitely at odds with the Ellison twins, Wiki and Leen, sisters who have been stiff competition when it comes to past heroics, for which all four are known. But they need Wiki and Leen. While the cousins dive into the past to unravel the origins of Mr. Flux, the sisters work out the mechanics of battling the threat in the present—their plan involves a robot, for a start. Fast-paced and funny, there is plenty of verbal sparring in the relationship between the boys and among the four, but also plenty of warmth in this clever, time-traveling tale. ©2019 Cooperative Children’s Book Center
Posted by Megan Schliesman at 6:00 AM No comments:

Email ThisBlogThis!Share to TwitterShare to FacebookShare to Pinterest
Labels: 2019 Books, Book of the Week, Multicultural Literature

Book of the Week: Beware of the Crocodile 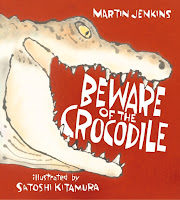 Lurking beneath the water, a crocodile waits for an animal to come down for a drink at the shore. “And then? Oh, dear … Let’s just say there’s a lot of twirling and thrashing, and then things go a bit quiet.” That’s just the start of this lively informational picture book which also reveals another side to these fearsome creatures. After laying and caring for their eggs, female crocodiles carry their newborns down to the water in their mouths. A mother watch over its young for months to protect them from predators (including male crocodiles). Many young don’t survive, but those that do grow up to eventually lurk beneath the water, waiting for something to come down for a drink … An engaging, energetic primary text punctuated by droll moments of humor is accompanied by additional facts on various pages (e.g., crocodiles can go for weeks between meals, they typically lay 40 to 60 eggs which take 80-90 days to hatch), as well as information about different types of crocodiles, and related species, at book’s end. The mixed-media illustrations give a wonderful sense of size and drama. ©2019 Cooperative Children’s Book Center
Posted by Megan Schliesman at 6:00 AM No comments:

Email ThisBlogThis!Share to TwitterShare to FacebookShare to Pinterest
Labels: 2019 Books, Book of the Week

Book of the Week: A Thousand Sisters

A Thousand Sisters: The Heroic Airwomen of The Soviet Union in World War II

A substantial and arresting history of Soviet women flying combat missions during World War II begins with the rise of the Communist party in Russia. Its stated commitment to equal opportunities for men and women was not the reality, but a generation of young women grew up with opportunities to learn how to fly in Communist youth clubs. All Soviet citizens were expected to prepare for the (inevitable) Future War. When the Germans invaded in 1941, Marina Raskova, the country’s most famous women pilot, successfully lobbied to create a women’s air force combat unit. Eventually 1,000 young women joined this effort to fight in the Soviet Union’s “Great Patriotic War.” Some were pilots, some navigators, some assigned to ground crew in three regiments: 588th Night Bomber Aviation (in biplanes), 587th Bomber Aviation (larger bombers with a crew of 3), and the 586th Fighter Aviation (solo fighter pilots). A lengthy, compelling narrative describes their training, stress and frustrations, frightening missions, bonds formed (as well as some friction), losses endured, skepticism and sexism faced and overcome (because “equality” in words does not equate equality in action or attitude), and the respect they earned among many male colleagues and commanders. A book that does not glorify war does illuminate the commitment and skill of these women, many of whose individual stories unfold. Notes, an extensive bibliography and index are included. ©2019 Cooperative Children’s Book Center
Posted by Megan Schliesman at 6:00 AM No comments:

Email ThisBlogThis!Share to TwitterShare to FacebookShare to Pinterest
Labels: 2019 Books, Book of the Week

Book of the Week: Planting Stories: The Life of Librarian and Storyteller Pura Belpré

When Pura Belpré came from San Juan to Nueva York in 1921, “words traveled with her: stories her abuela taught her. Cuentos folklóricos Pura told in the shade of a tamarind tree in Puerto Rico.” Pura gets a job at the New York Public Library, but there are no stories like the ones her abuela taught her on the shelves. Pura begins telling them herself in bilingual story times, eventually adding puppets, but she knows books are important too, which is why she begins writing the cuentos down. Pérez y Martina is the first of many tales from her homeland written by Pura and published for children everywhere to read and hear, each story a seed she planted that continues to grow and bloom. Illustrations with a vintage mid-20th-century feel in palette and style form the backdrop for a lively narrative perfect for reading aloud, which is just as it should be given Pura Belpré’s storytelling gifts. ©2019 Cooperative Children’s Book Center
Posted by Megan Schliesman at 6:00 AM No comments: