Here at the CCBC we are constantly reading and evaluating the new books that arrive on a daily basis. We discuss some of the books face-to-face in a monthly discussion group open to anyone who wants to attend. But there are many, many more books that we discuss just among the four of us as we consider books that we will eventually select for our annual publication, CCBC Choices.

Much as we all wish we could just sit at our desks and read all day, there's not enough time for that, so we do the bulk of our reading at home, in the evenings and on weekends. Thanks to the wonders of the internet, we are able to discuss these books as we read them via a running Google Doc, where we indicate our yes, no and maybe votes for inclusion in CCBC Choices. Unless we have four yes votes or four no votes, we also discuss all these books again face-to-face in order to make our final decisions. There are always some books, such as Under a Pig Tree by Margie Palatini, where we decide we need outside opinions, either from our monthly discussion group or from a content expert.

Although our Google Doc discussions are in-house and not intended for public consumption, we thought it would be helpful to get some opinions on this book from our blog readers, so we've decided to share it here. We all really liked the book a lot and admired the humor of the the running joke ("fig" is mistaken for "pig"), and the way it plays out in the artwork. But there were two illustrations that raised questions, one serious and one not. Here are the two pictures that prompted in-house discussion. The discussion itself has been cut and pasted from the Google Doc immediately below the two pictures. 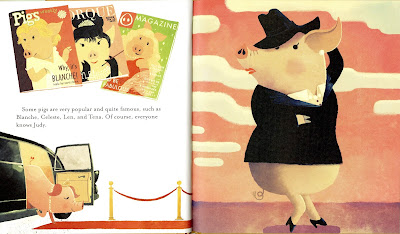 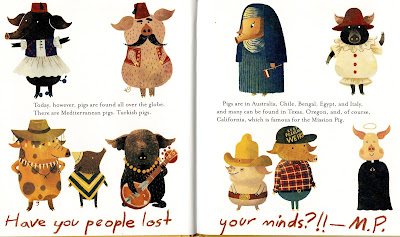 Palatini, Margie. Under a Pig Tree: A History of the Noble Fruit. Ill by Chuck Groenik. Abrams

MS: Yes. Hysterical!
MVL:  Yes.   I must be missing the joke on the page that reads “Some pigs are very popular and quite famous, such as Blanche, Celeste, Len, and Tena. Of course, everyone knows Judy.”  Blanche, Celeste, and Tena all appear to be types of figs.  But Len and Judy?  I’m thinking there’s some wordplay there that’s zooming over my head. 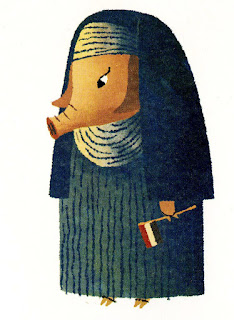 KT: Maybe. I love this but was taken aback by the pig wearing a hijab, since pigs are forbidden in Islamic cultures.  Maybe I’m going overboard but I thought that was culturally insensitive on the part of the illustrator. In terms of the celebrity pigs I don’t get Len either, but the Judy is the Garland fig (and that was my favorite picture of all. It made me laugh out loud.)
MS: Thanks for pointing that out, KT. I did notice the priest pig, which I thought some would find offensive on principle, but the Muslim pig slipped by me.  And the point is different and I think important to think about. It’s a representation issue that violates a belief in Islam that pigs are haraam---they are truly considered filthy and so to represent a Muslim that way--yikes!  (It would be the same to see a Hasidic Jew represented as such). I do love the humor in this book, but I think that is an unintentional and unfortunate oversight.
Later:  Ok. I looked again.  I think that the hijab isn’t a hijab but is meant to represent Cleopatra (her hair) for “Egyptian fig.”  (That whole page spread gave me pause re. cultural representation on my initial read-- all of it is stereotypical/tongue in cheek.  But I took Cleo for Cleo and not a hijab which is why I didn’t remember a hijab. But the fact that KT and I disagree on this interpretation makes it still potentially problematic as I can clearly be taken as a hijab.)  Re. types of figs: Len and Judy are also types of figs. I’m not sure who each is supposed by be as represented beyond “Judy Garland” as KT noted. Is Blanche Blanche DuBois? Celeste looks like Audrey Hepburn as Holly Golightly in Breakfast at Tiffany’s--?. “Len” and “Tena”--?  (Way overthinking this page.)
***
We'd love to know what you all think.  Cleopatra or hijab? And who is Len?