The Numbers So Far

Every year the CCBC releases the statistics on books by and about people of color in early March at the time our annual publication CCBC Choices comes out.  This year as we were preparing a special "Diversity Matters" display at the CCBC, we calculated the numbers for far for 2015 based on roughly 2,000 books we've received this year.  Here they are: 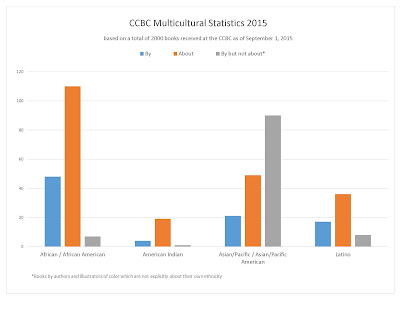 We were hoping we'd see improvement over last year but so far that doesn't appear to be the case. And one trend we noticed last year seems to be even stronger this year: that Asian/Asian Pacific American authors and illustrators are creating many more books that don't feature Asian characters than those that do. Zetta Elliott blogged about this observation in a two-part post earlier this year.
Posted by K T Horning at 5:25 AM