Book of the Week: Poems in the Attic 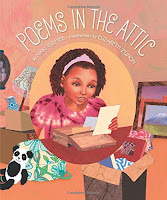 Poems in the Attic
by Nikki Grimes
illustrated by Elizabeth Zunon
Published by Lee & Low, 2015
40 pages
ISBN: 978-1-62014-027-7
Ages 5-9
A warm picture book collection alternates between poems in the voice of an African American girl whose mom is away in the military, and poems in the voice of her mother as a child, growing up in a military family that moved many times. The contemporary girl’s discovery of her mother’s childhood poems has inspired her to write her own, which often reflect on the differences between their childhoods, especially as she is living in one place with her grandmother while her mom is away, rather than moving from place to place. But there are many parallel experiences that play out in the two poems on each page spread, one in each voice. There is a strong sense of connection and continuity—grandmother, mother, grandchild—while in both present and past there is a child missing a parent who is away on duty. The illustrations do a terrific job of distinguishing between present and past on the same page spread. An author’s note talks more about the experiences of military children and identifies the actual U.S. air force bases which formed the locales for the places the girl’s mother lived as a child.  ©2015 Cooperative Children’s Book Center
Posted by Merri Lindgren at 8:17 AM