Book of the Week: Booked 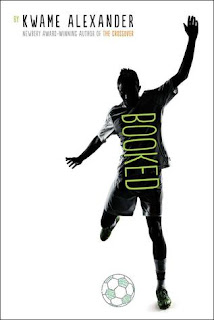 Ages 9-13
“Average person knows about twelve thousand words. / Average president knows twice that, he says, sounding like / Morgan Freeman.” Nick, 12, is an only child whose parents are on the brink of divorce. While his mother is in Kentucky training race horses Nick is home with his professor father, who is always badgering Nick to read the dictionary he wrote. Nick considers the dictionary, and by extension all reading, a chore. What Nick does like is soccer, his friend Coby, and April, a member of the school’s book club. It’s because of April, and Mr. Mac, the enthusiastic school librarian, that Nick starts reading. But it’s soccer that he lives for, and the upheaval in his life has made an upcoming, elite tournament in Dallas even more important to him. Then an injury makes it impossible for him to play. In a narrative in verse, Nick moves between first- and second-person (referring to himself as “you”) as he struggles with change, much of it unwanted, but some of it surprising for its unexpected goodness. The fast-paced plot is punctuated with soccer action, but the story plays even more with language than soccer balls, including some of the unusual words Nick has learned from his dad’s dictionary, which he defines in footnotes that are always illuminating and often amusing. ©2016 Cooperative Children’s Book Center
Posted by Merri Lindgren at 7:37 AM