Book of the Week: We Don't Eat Our Classmates 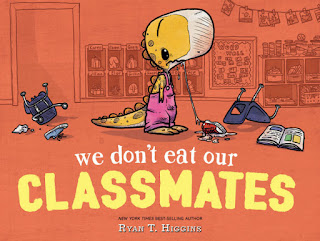 Penelope Rex is nervous about starting school, but she’s prepared: She’s got a new backpack with ponies on it (she loves ponies--they’re delicious), and 300 tuna sandwiches packed for lunch. But she is not prepared when she walks into her classroom and discovers the other students are all children. “So she ate them. Because children are delicious.” She spits them back up after being yelled at by her teacher, but it isn’t easy to make friends after that. Everyone is afraid of her, especially as she’s prone to the occasional relapse. Discouraged, she asks Walter, the class goldfish, if he’ll be her friend. Walter’s response gives Penelope a new perspective on how it feels to be someone’s snack, paving the way to friendship with her classmates. There’s no heavy-handed lesson in this hilarious picture book but that doesn’t mean there isn’t food—or at least a snack—for thought. The humor gets an even greater boost in mixed-media illustrations showing sweet-faced Penelope in her bright pink overalls alongside a diverse cast of sometimes angry, sometimes fearful, ultimately friendly human classmates. ©2018 Cooperative Children’s Book Center
Posted by Megan Schliesman at 6:00 AM

Email ThisBlogThis!Share to TwitterShare to FacebookShare to Pinterest
Labels: 2018 Books, Book of the Week