Book of the Week: Stamped: Racism, Anti-Racism, and You 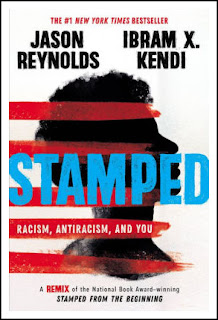 
This necessary book for our time is labeled a “remix” of Kendi’s 2016 National Book Award winner published for adults, Stamped from the Beginning. It’s an accurate description: Reynolds’ adaptation is intimate and conversational, a significant departure from the original compelling but academic tome. Frequently speaking directly to young readers in his distinctive and recognizable voice, Reynolds makes hard truths accessible in the tone of a trusted friend breaking it down with honesty, and even occasional humor. After documenting the origins of racist ideas, he introduces three categories of people based on their beliefs: racist, assimilationist, and anti-racist. This is followed by a chronological exploration of the racial politics of United States, from the Puritans through the Obama era. Along the way are examples of historical people, from Cotton Mather to W.E.B. DuBois to Angela Davis, showing how each exemplified the definitions of racist, assimilationist, and anti-racist. The narrative stops just before 2016, but readers have been given the foundation to begin to evaluate our current era on their own. Although Stamped is a real departure from Reynolds’ fiction and poetry, it still bears his trademark style, which will make it extremely appealing to his fans, and may even win him some new ones. An Afterword written directly to teens is especially moving and powerful. (KTH) ©2020 Cooperative Children’s Book Center
Posted by Megan Schliesman at 6:00 AM

Email ThisBlogThis!Share to TwitterShare to FacebookShare to Pinterest
Labels: Book of the Week, Multicultural Literature