The Numbers Are In: 2019 CCBC Diversity Statistics

Each spring, the CCBC releases the numbers of children's and YA books by and about BIPOC (Black, Indigenous, and People of Color) received in the previous year. We're later than usual with the 2019 numbers due to the disruption of the COVID-19 pandemic. Additionally, work-from-home limitations mean we can't update the publishing statistics on our website. In the meantime, we hope that this blog will serve as a space to announce the 2019 numbers and provide a few visuals.

Brief explanations of our numbers and charts are included in this post. For a more thorough explanation, please see the Diversity Statistics FAQ on our website.

For the first time this year, we are counting books by and about Pacific Islanders. Previously, these books were included in the Asian/Asian American count; we learned that that was not an accurate way to represent them. Thank you to Uyenthi Tran Myhre for correcting us. We retroactively examined the 2018 numbers in order to extract Pacific Islander numbers from Asian/Asian American numbers for comparison in this post.


Please note that a single book may be counted in more than one category (e.g., one book may have two protagonists, one Black and one Native; a single author may identify as Afro-Latinx). Therefore, "by" and "about" numbers in the charts will not add up to the total number of books received. Likewise, percentages will not add up to 100. 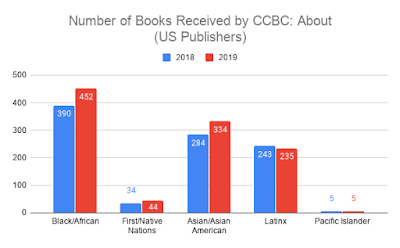 This may seem like a significant increase, but it actually represents just a 0.5% change. Since the total number of books we receive varies from year to year, it is helpful to consider percentages rather than raw numbers when comparing years. 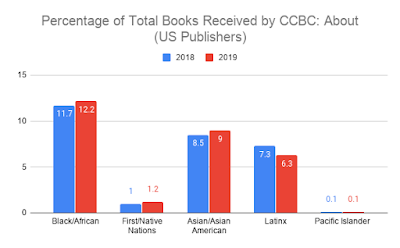 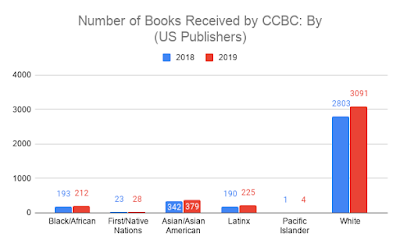 The above chart shows the number of books by--which means written and/or illustrated--at least one individual who identifies with the specified category. Take a look at the first two columns on the left, labeled "Black/African." In 2018 (blue), we received 193 books written and/or illustrated by at least one individual who is Black/of African descent. In 2019 (red), we received 212 such books. 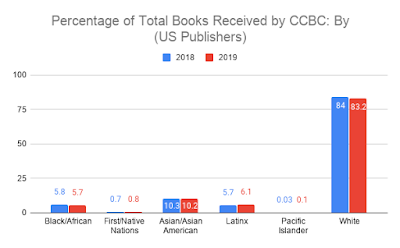 The above chart shows the percentage of the total number of books we received. Take a look at the first two columns on the left, labeled "Black/African." In 2018 (blue), 5.8% of the total books we received were written and/or illustrated by at least one person who is Black/of African descent. In 2019 (red), that number dropped slightly to 5.7%.

Now let's take a closer look at primary characters (US publishers only). Below are the number of books that had at least one primary character who could be identified as belonging to one of the following categories.

For ease of comparison, here are the above percentages in a bar chart: 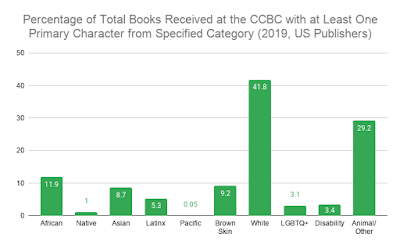 What does all of this mean? Our numbers continue to show what they have shown for the past 35 years: Despite slow progress, the number of books featuring BIPOC protagonists lags far behind the number of books with white main characters--or even those with animal or other characters. Taken together, books about white children, talking bears, trucks, monsters, potatoes, etc. represent nearly three quarters (71%) of children's and young adult books published in 2019.

Finally, as indicated by the addition of the Pacific Islander category in 2019, we are still learning as we do this work how best to do this work. We are grateful for the feedback and voices of Arab and Arab American colleagues on Twitter and elsewhere who have helped us understand the importance of adding Arab/Arab American as a category; this will be included and reflected in our statistics for 2020 and beyond.

Update: A previous version of this blog post used the term "(dis)ability." It has been corrected to "disability." Thank you to David Gillon for pointing out this error.
Posted by Madeline Tyner at 8:30 AM